Moonlight in Romania: The Tărtăria Tablets

Just minutes before going out the door to travel to Romania for the summer, I was looking for interesting ancient mysteries to study during our stay. I knew that there would be many days in Romania when I could get myself to some establishment, sip a few, people watch, and dabble in something mentally stimulating as well.

I was intrigued to discover that a set of artifacts believed to be an example of Late Neolithic writing were discovered in Tărtăria Romania. They were discovered by Nicolae Vlassa in 1961 during an archaeological dig. I printed off some photos and line drawings from the Wikipedia page, where you can learn more about the artifacts.

One day in July, with my wife going out to lunch with a friend, I went to Piata Unirii, a huge shopping mall contained in a single building. It's a nice walk from Piata Universitate, which I reach on the tram from our flat. They've got a bowling alley on the top floor, along with a nice food court. I bowled three games and then went downstairs to the first floor where there's a McDonalds.

Now, I love a Big Mac. What I particularly enjoy is the special sauce. I love it so much that I always ask for a side of extra special sauce to thoroughly slather the thing down. In the summer of 2006, I tried over and over to get a Romanian McDonalds to oblige me on this extra side of special sauce. I even offered to pay more, but workers for some reasons didn't seem to think they were authorized to do such a thing. Suddenly this last summer, either my Romanian has now improved to the point where I am explaining myself better, or the free market is taking root, but I'm getting my extra special sauce. At any rate, the day I had my breakthrough on the Tărtăria Tablets saw me eating my lunch there with a Tuborg beer as well. That's right; in Romania you can buy a beer in a McDonalds.

OK, that got a little off topic from the Tărtăria Tablets. Anyway, after lunch I went back upstairs to the food court and settled into the small non-smoking section. I got another beer from one of the establishments. I struck upon an idea at the beginning of my third beer. I'll diagram my proposal for what one of the Tărtăria Tablets is doing.

This artifact is clearly divided into quadrants. I'll number them consecutively, starting arbitrarily at the Northwest section and going clockwise. As I show you the quadrants, I'll show you a close up of the area with a duplicate shot in which I outline the groves of the inscriptions. Here is Quadrant I: 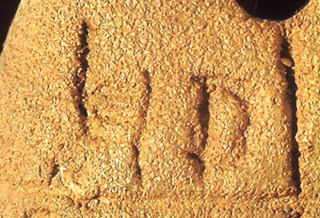 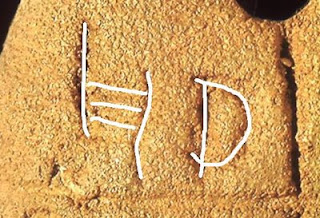 The semicircle struck me as a probable moon symbol. But what does a moon represent? A reasonable option is to make a moon stand for the number of days in a lunar cycle. As i sat there, I wasn't sure myself of what a lunar cycle is exactly. I knew it was something short of 30 days. That led me to an intriguing possibility. What if the other inscription in Quadrant I is meant to also convey the number of days in a lunar cycle? What if Quadrant I is a sort of legend, showing the values that will be operative elsewhere? Now, the other inscription in Quadrant I appears to be three lines in a row with two lines pointing out in each direction.

Perhaps each line stands for 10 and the lines pointing out are meant to convey subtracting one or two days from that sum. That would theoretically bring us to the number 28 or 29, which isn't far from the lunar cycle. Later at home with internet access, I was able to get the info that the exact lunar cycle is29.53 days. Now, I know what I just presented isn't a slam dunk. I'm going to ask you to consider it, however, in light of how this hypothesis plays out on the rest of this particular tablet.

On to Quadrant II: 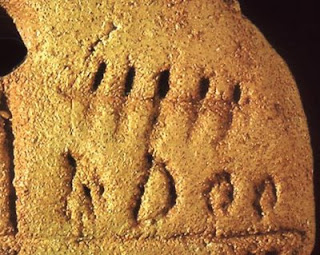 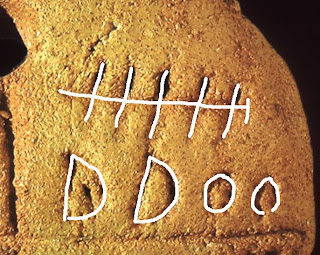 We've got here two moons and two small circles. Sticking to an astronomical interpretation of symbols, I supposed that the small circles are suns, which could each signify a single day. Doing the math, two moons plus two days will equal 60. Now and behold, the other inscription in Quadrant II is a straight line with six shorter lines intersecting it. This is what we would have supposed 60 to be in the line notations. 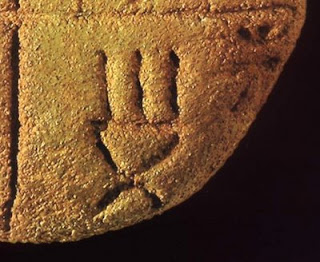 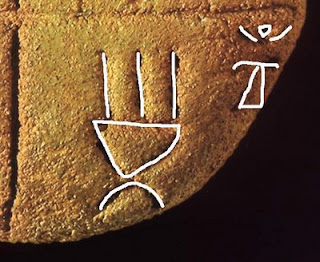 The most glaring numerical aspect seems to be 3 of something. Maybe that's a guy off at the side, who knows. Are the 3 lines coming off a glass or something? Or am I just seeing a glass because I would have ordered by fourth beer by now?

We move to Quadrant IV: 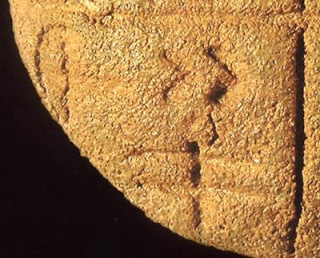 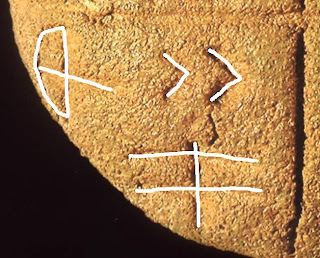 We've got a moon with a line intersecting it and two V shapes. I supposed that drawing a line through a moon could signify dividing it in two. It'd be hard to divide an odd number like 29, so I decided to assume this means the next smallest even number of 28. So a moon with a line through it is 14. The long line with two shorter lines would want to signify 20 in the system I'm positing for the rest. This led me to recall that a V is a shorthand way of writing three dots in Arabic script. A V is a shape with three points, so it could be a nice way to clearly write a 3. And that would give us 14 + 3 + 3 = 20, just as the other Quadrant IV inscription would have.

And now, looking at the whole thing, notice that there's an equation that works between Quadrants II, III, and IV:

As for what all this would mean, I am going to avoid the tendency so often seen with speculative decipherments of ancient texts to push one observation into a full reading. My twin brother Kevin, looking at what I came up with here proposed that this and the other tablets were somehow recording commodities, perhaps an early system of symbolic bartering. At any rate, I offer these observations in the hope that the mysteries of the Tărtăria Tablets can be better understood.

I thank Tărtăria Tablet researchers Gheorghe Lazarovici and Marco Merlini for sending me the close ups I use here and giving me permission to use them. Va multumesc! 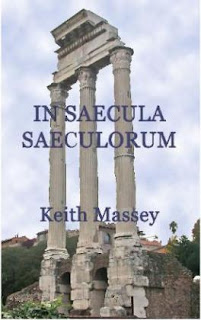 If you're interested in languages or ancient history, or even just an entertaining read, check out the time-travel thriller In Saecula Saeculorum. Click to learn more.


You'll travel back to ancient Rome on a harrowing mission to save the modern world. It's the adventure of four lifetimes.